Skip to content
HomeThe Women’s March on Montana: The Experience. From Crowds to a Rural Montana Bar

With estimates between 2.6 and 2.9 million women and men in attendance across the nation, the march is regarded as the largest protest in U.S  history. And, as NBC News points out, not a single arrest was needed. Peaceful is productive. Additionally, there were hundreds and hundreds of rallies worldwide. (Click here to see the amazing NYTimes gallery of global marches photos.) Millions of women and men are finally on board with the importance of feminism. 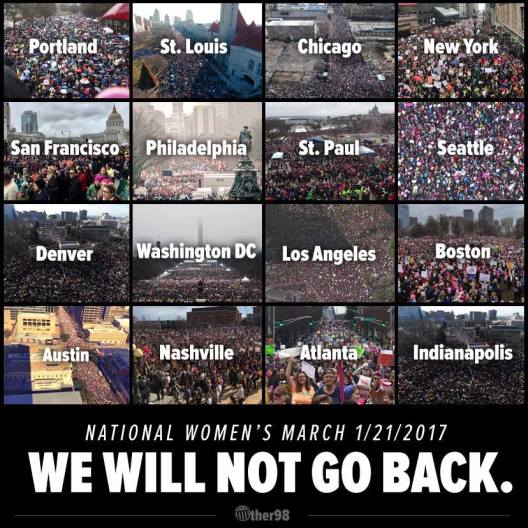 The March in Montana was a profound experience. When we arrived at the Women’s March in Helena, the crowd of women and men was so massive it curved around up ahead beyond our sight. I got more of a sense of just how huge the protest was when a wave of momentous cheering came from somewhere far, far ahead and rippled through the crowed to where we stood. I couldn’t help but turning to my friends and saying “This is the positive revolution right here.” And it truly is, especially if we keep this momentum up.

The sun hadn’t made it’s way out of the clouds for weeks and here it was warming up us protesters in the below freezing temperatures. The energy was amazing. The march began to move with signs bobbing up and down and people joyously coming together to celebrate ‘love trumping hate” and to stand up fiercely for ALL women’s rights. As the march turned the corner, my friends and I took to climbing the snow covered hill, our boots sinking into feet of snow, along with other marchers, to get a glimpse of the speakers with the magnificent Helena capitol building in the background. The speakers began with first acknowledging that we were standing on native ground. Speakers talked about women’s rights including bodily rights, freedom from rape, native rights, economic justice, black lives matter, LGBTQ, water protectors, access to good education, muslim rights and uniting all women and men. I looked around at the crowd of fierce women of all ages taking a stand, and at my amazing friends who had come with me. I especially appreciated that three of my best guy friends had been so excited to come out and show support with us. They were one of the thousands of men who marched in partnership.

After the march, the town of Helena was packed and it was impossible to find a place to eat so we stopped into a bar and grill in the middle of nowhere in between Helena and Missoula. We walked into the bar filled with very nice, yet thrown-off at seeing us, cowboys and men in snow work-pants and camouflage. I took my jacket off and sported my “this is what a feminist looks like” shirt and my Rosie the Riveter earrings without thinking about how funny it was I was rocking my feminism so proudly in such a bar: A rural area in the thick of Montana where, according to most voting trends, had most likely voted for Trump and might never have taken a second thought to think about why feminism might be important. More marchers ended up coming into the place, throwing off the original rural, isolated vibe.

Driving home with my friends sleeping in the backseat as I peered out at the snowy landscape with the sun peaking through the clouds in shades of tangerine,  I thought about how influential the moment was: Finally, women’s voices were being heard in massive protest. (One only has to look at the absence of women’s participation in history to gather the momentousness of the day.) Nearly 10,000 women and men turned out for the march in Helena, (6,000 more than projected) and nearly 500,000 women and men turned up in Washington D.C, and 2.6 million across the nation, to say: It is high time we have bodily rights, equal pay, freedom from rape and other violence, and the ability and right to participate fully and loudly in our own society. To say all people, women and men of all color, of all backgrounds, religious (and non-religious) affiliations, sexualities and gender identities, all have inalienable rights that need respect. To paraphrase one of the speakers at the rally “We need to look at our neighbors and say, ‘I see you and I honor you.'”

We are a community of humans: The experience made my heart feel full to the brim with, you guessed it, LOVE. Love is such a fundamental driving factor in humans which creates such immeasurable beauty we should not be afraid of being “cheesy” and instead say “Yes. I’ve got a lot of love for y’all fellow humans, ALL of you, and we’re all in this together. So I’m going to act with love.” Throughout the march, I thought especially of my loving mother and my grandmothers.