The Genocide Memorial: I had taken my time finding my way over to the memorial, perhaps because I had not wanted the genocide to paint my journey in Rwanda in tints of red, but it was time I paid respects. After visiting the place where 250,000 victims are buried in mass graves yesterday, I don’t know if I can put the experience into words yet. But I’m going to try. A few words that come to mind are overwhelming, sorrow, horrifying and heart wrenching. Reading about it, talking about it and learning about it in school are one thing but seeing the bones, pictures and graves of the victims is quite another. The memorial site and museum has real life video of the desecrated bodies that were left behind, strewn about like discarded clothes. My stomach is feeling sick again just thinking about it. It is an overwhelming experience to visit the memorial, but a time of necessary education for me. It is deeply unsettling to see what happened here just 19 years ago. The fact that the people you pass on the street or sit on the bus with are living with the sorrow of recent history is a regretful truth. Having visited the memorial, this fact is especially clear in my mind now. And the fact that the men and women you meet who have limbs missing are survivors with visual emptiness left behind by the genocide is a sobering reality, to say the least.

But I’m going to move on to something more uplifting so that I don’t feel my core sink into my shoes. Something that stood out to me at the memorial, in a good way, were the stories of the people who saved others. Some Tutsis (the group of people who were nearly wiped out) and Tutsi “sympathizers” were rescued by some very brave people. One woman in particular saved others by hiding them in her house and used her reputation as a woman “possessed by evil spirits” to scare off the perpetrators of the genocide. She saved 17 people. There were others too who saved neighbors, friends and strangers who’s heroic stories are told along the walls of the memorial, but the horrendous history of the genocide laid out in the museum and the mass grave can leave you feeling mentally paralyzed. 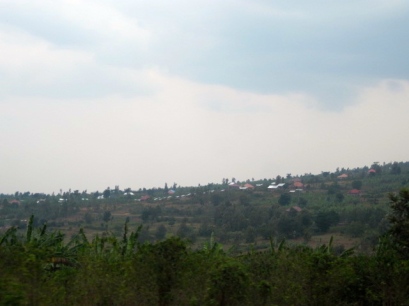 After visiting the memorial I had to rush back to the high school for Parents Visiting Day and felt foggy while traveling the two hours back to Gashora. I peered out the windows of the bus towards the green hills lost in thought, nervous about being late to meet with my students’ parents, some of the very people who have probably experienced and seen the genocide first hand. Thankfully, I made it on time to meet everyone but the heaviness of seeing the memorial was a sorrowful companion throughout the day. I am grateful to have a deeper understanding of what happened here so recently in history but it is difficult and heavy to absorb.